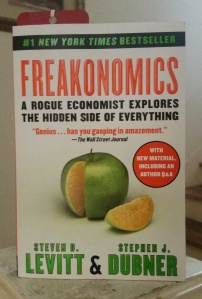 Freakonomics is a New York Times bestseller based on the hidden secrets in the world of economics. The authors Steven D. Levitt and Stephen J. Dubner expose some of these secrets through real situations like incentives, cheating, and cultural awareness. They make the case that conventional wisdom is often wrong when trying to determine what makes a society grow vs. what makes society crumble and perish. This unifying theme of conventional wisdom is picked apart and debunked case by case based on statistics and historical research, to provide an accurate account of why societies crumble, or why they’d be better off doing the math.

Between 1995 and 2005 it had become conventional wisdom that the murder rate among teens would spike in the next decade. The reasoning behind this was the past decade’s huge increase in gun violence. It was thought that a generation of killers were in the mix, in the form of a “big-city teenager with a cheap gun in his hand and nothing in his heart but ruthlessness.” Thanks to Roe v. Wade we didn’t have this problem. If children were born into an adverse environment, they’d be far more likely to become criminals.

A common assumption in politics is that the amount of money a candidate has causes him to win. This isn’t true, necessarily. While spending money can gain an advantage of exposure over opponents, the book says “What really matters for a political candidate is not how much you spend; what matters is who you are… The appealing candidate raises much more money and wins easily.” It’s not always about how much money you have, rather, how attractive you are in the public spectrum.

Freakonomics does a great job of unearthing the secrets of an economy – good and bad. It can teach you about parenting, what to do in a high-risk gun-related incident, and even how to rob a bank. Altogether, this book is one to keep on your shelf.